Help with the housework

My kids are not keen on housework, in a big way, having said that they have emptied and filled the dishwasher for years but it took years of fighting to make it routine and they will still forget it or any part of it if we are not on their backs. Now the middle two are reaching young adulthood and have begun asserting that they intend never to cook, do not value a tidy house and will continue to avoid any kind of effort to improve or maintain their environment it has been on my mind that perhaps I have not been doing my job properly.


I have been a subscriber to Flylady http://www.flylady.net/index.asp for years, with minimum noticeable effect unfortunately, and we have been having 'house blessings' (everybody working to clean/tidy the house) on the occasional weekend and these make a big difference even if we only work for half an hour. However I have learnt not to use the words blessing or flylady as this can produce total mutiny from the older ones.

This half term (my middle two are still in school) I decided that they had to help or I would go under and drag their dad with me so I have been thinking hard about the best way to get their help. Should I tell them I need their help for a certain time each day, no, too much information, they are cleverer than me and would find a way to undo my plans. Should I appeal to their better nature, better not, could be disappointed, don't want to find out they don't have one. So I decided to take each day as it comes and to ask them for a little help as if I had not asked them before, no warning, take them by surprise.


The first day was great and we transformed the hall between us and got a few other things done, I even got Will to put a wash on (by stealth, he did not know what he was doing until he had done it, babysteps!) 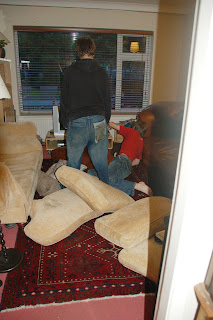 Yesterday I decided we had to work on the living room. This room is small for five people and heavily used but it had to be transformed into a suitable setting for my birthday bouquet. Will and Jamie were allocated the task of sorting out the sofas. This did not quite go quite to plan and a hilarious hour ensued where the cushions were anywhere but where they were supposed to be. Oh well it was an improvement in the end and the flowers look gorgeous. 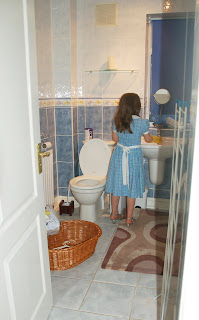 Beth decided as she mostly does to clean the upstairs bathroom but this time with a twist, she dressed for the role. This isn't a great picture but she has on her bridesmaid high heels, a little white frilly apron, long yellow gloves and a DRESS! She has been dressing almost entirely as a boy for a year (why is another school related story) and it is great to see her relaxing and playing at being a girl again.
Posted by Maire at 22:20

Absolutely love your blog Mum! Especially this bit about the kids & cleaning - I can just imagine the scene now! I particularly love beths outfit - tell the other 2 I'm wholeheartedly dissappointed in theirs in comparrison! *(Sure they will be pleased & take it as a complement.
The pics from your birthday look stunning - hope the matchingish items arrive soon. I'll try to read this a bit more often sorry

Wish you were here

Hi Jo, glad you like it. Jamie is wearing red, that is making a huge effort for him, actualy he recently asked me to take him to tescos and bought two new pairs of jeans voluntarily. I wish I was there too!